I’ve long been an enthusiastic supporter of using information and communication technology to support healthcare, education and political and economic empowerment. My interest dates back to 1982, when I wrote a graduate school paper entitled The Human Development Network. At that time, cable TV and desktop PCs were the new technologies of the day, the first brick-sized portable cellphones had yet to hit the market, and the closest thing to smartphones and “wearables” were found in the fictional worlds of Star Trek and Dick Tracy. Given my longstanding interest in beneficial uses of technology, it’s exciting to see today’s explosion of innovation related to wireless connectivity, and to consider future possibilities, including graphene-based wearables (see here and here).

That being said, I’m concerned that, in our rush to exploit the power of today’s wireless technologies, we are ignoring an uncomfortable issue raised by its rapidly expanding usage: the fact that we don’t understand very well the health impacts of surrounding ourselves (particularly our children, elderly, infirm and other vulnerable populations) with ever-increasing amounts of electromagnetic field (EMF) radiation, using an ever-expanding array of devices, frequency bands, duty cycles, modulation schemes, etc. (it’s worth noting here that some forms of EMF have been shown to have health benefits).

Though I’m not an electrical engineer, biologist or healthcare expert, I’m convinced that I’ve read enough about this issue to conclude one thing with confidence: that we, as a society, would be wise to invest more time, money and expertise in studying the real-world biological and health impacts of the expanding array of digital technologies we use today—and that we’d be foolish not to.

I’ve also come to believe that, while such research may be challenging, it should be a top priority as we continue to increase our usage of and exposure to EMF-producing devices. And while it may be comforting (psychologically and financially) to cite the limited research currently available (perhaps with a bit of cherrypicking) as a basis for dismissing health concerns as we race eagerly forward into the next wave of wireless connectivity, I’m convinced that such a conclusion is premature and overly simplistic…and perhaps even dangerous, especially for our most vulnerable citizens.

A recent MarketWatch article highlights some of the potential risks and lack of research necessary to adequately understand and address them:

Executives dream of winning young customers over to their products. Companies like Apple…and Samsung…appear to be succeeding when the customers are barely out of their cribs.

More than half of babies in low-income households are tapping on smartphones or tablets by the age of two, with some spending more than an hour at a time using them. And more than one-third of low-income children have used them by the time they turn 1. That’s according to a study presented last month at the Pediatric Academic Societies annual meeting in San Diego by Hilda Kabili, a third-year resident doctor at the Einstein Health Network in Philadelphia. The American Academy of Pediatrics discourages the use of computers, smartphones and tablets by children under age 2, but there’s little long-term research on the effects of using them at such a young age.

I have to admit I find these statistics troubling in light of the last sentence about a lack of long-term research, coupled with research suggesting children absorb more EMF radiation than adults (for a short synopsis of this study, see this Forbes article).

I’m all for leveraging the power of wirelessly-networked digital technology. But if this technology is going be an ever growing part of our life (which seems extremely likely), I think we owe it to ourselves, our children and future generations to invest a small percentage of the many billions of dollars we spend on it to understand if and how it is impacting our health, and how we can best reduce any negative impacts. This seems especially important when it comes to the health of children, the elderly and other vulnerable populations.

I’m not going to argue here that EMF health risks are large, small or anywhere in between. In fact, I’m tired of hearing blanket assertions that various wireless technologies are either “safe” or “harmful.” [If you’d like to explore the debate and the research surrounding it, you might begin here and here (“harmful”) and here (“safe”)].

Simplistic assertions of safety or lack thereof may be emotionally and/or financially satisfying for those heavily invested in either side of the debate, which has been marked by dismissiveness and dissembling on one side, and sometimes blinding anger and distrust on the other.  But in such an environment, scientific and public policy questions that are already challenging become very difficult even to discuss, let alone to address with well-designed, unbiased research.

Yet it is exactly that kind of research that’s needed to clarify how we can continue to expand the benefits of wireless technology while mitigating harmful impacts associated with its ever-increasing use.  And this research should be well-funded and ongoing, as no doubt will be our continuing investments and innovations in wireless networks and devices.  And it should be well protected from money-driven (or any other) bias.  In my view, science influenced by corporate profit-seeking simply cannot be trusted as science (big pharma’s growing control and distortion of medical research, discussed here and here, is a troubling example of this dynamic).

$1B/yr. of research for the price of a small latte

In terms of funding, consider the following very rough calculation as an indicator of what might be possible if, as a society, we decided to take this issue seriously:

According to CTIA, there were 335.65 million wireless subscriber connections in the U.S. at the end of 2013. And, according to the Statista web site, the average monthly revenue per cellular user (ARPU) ranged from the low 40s to the high 50s, depending on the carrier. If we use the CTIA subscriber count and assume a monthly ARPU of $50, a 0.5% tax on cellular revenue would generate roughly $1 billion per year, with the per-customer cost being $3.00 per year or $0.25 per month. This amount could be further supplemented by a comparably small tax on carrier profits and/or on the sale of sale of EMF-emitting devices, including smartphones, tablets, laptops, cordless phones, etc.  And to the extent a similar tax was established in other countries, the total amount available for a global research effort on EMF health impacts would increase accordingly.

Using the power of tech to study its health impacts

To maximize its effectiveness and relevance, I’d suggest integrating a program of EMF health-impact research into the kind of “Learning Health Systems” now being developed (including a project underway at U of M).  In my view, the LHS model holds great promise as a way to use digital technology to dramatically improve the effectiveness and efficiency of our deeply dysfunctional healthcare system.

As explained on the Learning Health Community web site:

The LHS aims to harness the power of ever increasing amounts of health data captured in digital forms in order to engender ongoing cycles of knowledge generation and curation, tailored feedback, and transformative change. It is grounded in the recognition that two of the least well utilized resources in health care are patients ourselves (everyone will be a patient and/or caregiver) and lessons learnable from our collective health experiences. Such shared data that digitally captures these experiences (in many cases, simply as a byproduct of care delivery) forms the lifeblood of the LHS when it is aggregated, analyzed, and converted to actionable knowledge. This knowledge is then shared with stakeholders who can benefit and learn from it – and ultimately use it to improve health, save lives, revolutionize biomedical research, protect the public’s health, and transform our patient experience…

Just as the Internet had transformative impacts on numerous and diverse stakeholders’ ways of working, communicating, and interacting, the LHS promises to have broad and far-reaching impacts on health. The LHS is one infrastructure, serving multiple purposes, being built collaboratively atop a foundation of meaningful use and other health IT investments. In doing so, the LHS holds the potential to transform care delivery by shortening the on-average 17-year gap between knowledge generation and its application, to empower clinicians and patients with knowledge to inform their decisions, and to create a more robust public health and biomedical research infrastructure for the nation. 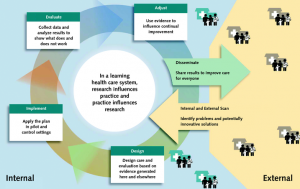 There’s more I could say about EMF health issues and Learning Health Systems, and how they may be related, but I’ll save that for future blog posts. For now, let me summarize the basic message of this post:

As we apply our creativity and financial resources to exploring and exploiting the many benefits of wireless technology, let’s also take responsibility for learning more about how these technologies interact with our bodies. And let’s also learn how we can best mitigate negative health impacts as we continue adding to the invisible but very real EMF cloud we’re all now living in. In my view, this is an effort well worth making, and certainly worth skipping one trip to Starbucks per year to help pay for it.

EMFshealth impactsLearning Health SystemsresearchWireless
Email Stamps: A Way to Control Spam by A. Michael Noll
The Rush to “Smart” Meters: Maybe Not So Smart?