It is official. Dr Bibi Reisdorf has been promoted both in the Quello Center and in the Department of Media and Information of our College of Communication Arts and Sciences at MSU.

In the Quello Center, Dr Reisdorf will be Assistant Director, working to support the Center’s research, outreach, and development. Bibi joined the Quello Center just last year as a Quello Post-Doctoral Fellow in Media and Information Policy. She came to us from the University of Leicester, where she was a Lecturer and Director of Distance Learning in their Department of Media and Communication. She has also been an adjunct professor at the University of Cincinnati. But it was not only her experience that merited her promotion.

At the Center, Bibi’s commitment and innovative approaches to research on digital inequalities have proven to be catalytic to a number of grant proposals and publications. Her role in outreach for the Center has been remarkable also. So we will not just be keeping Bibi at the Center, but enabling her to play an even greater role.

In the Department, Bibi was awarded a position as assistant professor. In this role, Professor Reisdorf will be redeveloping and teaching the department’s new undergraduate research methods course, and will be able to play a more active role in building the rising academic profile of the Department and College.

When I was at the University of Oxford, Bibi Reisdorf became a doctoral student, and soon took on an important role as a research assistant on the Oxford Internet Surveys (OxIS), which tracked the use and impact of the Internet in Britain from 2003 through 2013. Bibi demonstrated such a natural gift and remarkable acumen for quantitative analyses and survey research that she became a valued member of the OxIS team from her first days. It has been a delight to see her bring such talent to the department and the Quello Center at MSU. 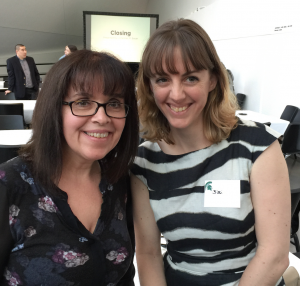 Bianca received her D.Phil. degree in Information, Communication and the Social Sciences at the Oxford Internet Institute, University of Oxford, in 2012, having completed an M.A. in Sociology at the University of Bielefeld, Germany, in 2008.