Great Tribute to Bob Albers from Media and Information Colleagues

As a new faculty member, arriving just three years ago, I learned a lot at the retirement party that the Department of Media and Information put on for Bob Albers, who was with the department for 35 years – maybe more. He was the first and founding director of what is called the Media Sandbox, which has attracted undergraduates across the university who want to learn the basics of media production.

All the art of media production went into his retirement party on May 1st. It was held in Studio A of the WKAR Studios, which are in the College of Communication Arts and Sciences, as is the Media and Information Department. The party seemed to have been produced by the new director of the Sandbox, Karl Gude, who did a brilliant job mixing people, stories, and media into a major tribute for Bob. It was funny, informative, and touching, even for those like me who are new to the College and Department. 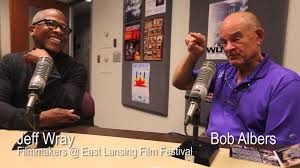 Congratulations to all who spoke and were involved in this production. In addition to Karl, these included Prabu David (Dean of College of Communication Arts and Sciences), Johannes Bauer, Gary Reid, Susi Elkins (General Manager of WKAR), Jeff Wray (College of Arts and Letters, who taught with Bob), Valeta Winsloff (mixed media from the back of the room at the Wizard of Oz media controller), Elise Conklin (one of Bob’s students who recently won a medal for the documentary “From Flint” at the 43rd Annual Student Academy Awards), and many many more.

Way to practice what you teach, my friends and colleagues, and thank you, Bob.