I was able to spend 14 March at the University of Illinois, Urbana-Champaign, to deliver their Windsor Lecture for the Graduate School of Library and Information Sciences (soon to be called the School of Information Sciences). I spoke on my conception of a 5th Estate, as a perspective on power shifts, bringing in some new ideas on my work in this area, along with a new case study developing around the Flint Water Crisis. Flint raises issues about the role of the 4th (the press) as well as the 5th Estate, and this case certainly struck a chord with the audience, stirring speculations on why the alarms from residents, including networked individuals posting about their concerns, were not headed earlier in this crisis.

Of course, one of the valuable features of doing lectures like this is the opportunity to catch up with former colleagues and meet new faculty. My host, Professor Les Gasser, briefed me on his social informatics course, which introduces undergraduates at UI to competing perspectives on the social shaping of information technologies. I was able to see Dan Schiller, now an Emeritus Professor, whose work on the geopolitics of information is widely recognized and something I should definitely include in the course I plan to teach in the Fall on the New Internet World. I also met with David Tewksbury, a masters’ student of mine from the Annenberg School at USC, who is head of the University’s Communication Department. I warned him (in jest) that despite taking only two courses of mine, I have long taken credit for the incredible success he has had throughout his career. 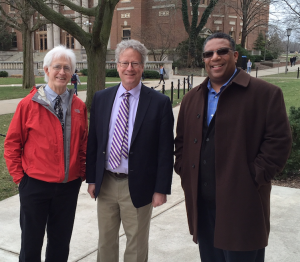 I also met many students and faculty I had not known. One was Jon Gant, Director of the Center for Digital Inclusion, who we need to bring to MSU for a talk. He has been central to much of the research on digital infrastructures and inclusion initiatives across the US, which are directly and immediately relevant to ongoing work of the Quello Center.

Fifth EstateGantGasserIllinoisSchillerTewksbury
Apple vs. the US Government by A. Michael Noll
The Quello Center: An Overview