Our Visiting Fellow from China over the past year, Dr Jingwei Cheng, has left to return to her position as an Associate Professor in the School of Economics and Management, Communication University of China, where she is the Vice Director of the School. With a doctorate in media economics, Jingwei Cheng has been studying the theory and regulation underpinning the media industry in China, such as through focusing on the impact of regulation on the diversity of programming on television in China. In addition to work on broadcasting, she has done research on China’s cable industry and mobile communication. Professor Cheng Jingwei was supported at the Quello Center through a State Scholarship Fund supported by the China Scholarship Council. One of many valuable commentaries before her departure, Jingwei Chen remarked on the serious levels of poverty she saw in the US, and wondered why so little attention is provided to this issue by the media, in comparison to Tweets and other issues surrounding the President, Donald Trump. 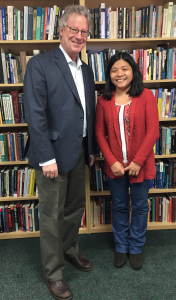 ChinaJingwei Chenmedia economicspovertyvisiting
Talking about the politics of the Fifth Estate with students in Lisbon
A Click Away from the Quello Center: Founding Director Steve Wildman