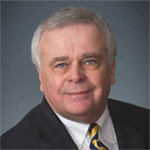 Donovan has occupied the position since June, 2011. He currently serves on the Department of Commerce’s Spectrum Management Advisory Committee (CSMAC) as well as the FCC’s Communications Security, Reliability and Interoperability Council (CSRIC).

From 2001 to 2011, he served as president of the Association for Maximum Service Television, Inc. (MSTV), the leading engineering trade association for the television industry. During his tenure, MSTV helped guide the industry through the digital transition. It helped design and implemented the DTV channel selection process as well as the development DTV converter box. Working with Sprint, MSTV helped oversee the reallocation of BAS licenses. He led the fight to establish technical rules to avoid interference from unlicensed devices operating in the television band.

Donovan served as the Vice President for Legal and Legislative Affairs for the Association of Local Television Stations (ALTV) from 1990 to 2000. He worked with the NAB and successfully lobbied for a TV stations right to must-carry and retransmission consent. He successfully lobbied for the carry one-carry all rules that govern satellite must-carry. Donovan helped relax the TV duopoly rules for large markets, and was involved in the financial interest and syndication rules.
Joining the Federal Communications Commission in 1983, Donovan occupied a number of important legal positions at the agency. He was directly involved in revising content regulations as well as the ownership rules for radio and television. Donovan served as the chief media advisor for the Honorable James H. Quello for three years.

An attorney, Donovan is licensed to practice in Massachusetts and before several federal courts, including the United States Supreme Court. He earned his JD from the Suffolk University Law School in Boston. He received an MA in communications and BA in political science from the University of Massachusetts (Amherst).

Donovan and his wife, Jackie, live in the Albany area. He has three adult sons and a little dog.