Namely, Michigan State University (MSU) is doing a terrific job at what a public university is supposed to do. 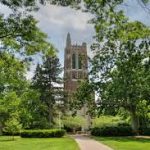 First, it is educating a huge number of Michigan students. Its enrollment is over 50,000 students, and this year saw MSU’s largest class in its history – 8,000 first-year students, plus 1,550 transfer students (Lansing State Journal 8/28/17). And most (72%) are Michigan students, with MSU being the top destination for public high school graduates in Michigan.

Thirdly, students are getting jobs. MSU has been tenth in the nation in its job placement rate http://www.onlineschoolscenter.com/30-colleges-impressive-job-placement-rates-career-services/ It has since risen to third. Incredible.

So the new academic year is looking good for MSU Spartans.