Bob LaRose is giving a leaving lecture entitled ‘The Challenge of Media Habits’ on April 4th at 1:30PM in CAS Rm 145 at MSU. Bob is a distinguished professor at MSU, and possibly most widely known for his multi-edition text with Joseph Straubhaar and Lucinda Davenport, entitled ‘Media Now‘ – which is now in its 9th edition. He has been one of the early pioneers in research on new media, being one of the first graduates of the Annenberg School of Communication at USC, when the late Fred Williams, the founding Dean, launched the School with a new media focus. Traditions in the study of the media infuse his work on new media, leading him to address topics around effects, and habits, that are less prominent among the born new media researchers. That said, you can increasingly recognize developing habits around the use of such new media as social media and Twitter, so the old and new media research traditions are beginning to connect.

It seems clear that Bob LaRose has had a major influence on the Department of Media and Information at MSU, which seeks to bring together the study of media and information technologies and society. He will be missed in the Department and at the Quello Center, where he led some roundtables on such issues as social media effects, and also donated a couple of his paintings, which remain on the walls of the Center. 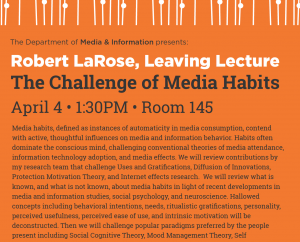 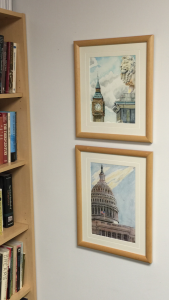 AnnenberghabitsLaRoseLectureMediaMSUnew media
The Un#ballogetic World of Wireless Ads
Is the Internet Destroying Scholarship? by Michael Noll