James Spaniolo is moving back to Texas, accepting the position as President and CEO of the North Texas Commission, a public/private partnership composed of 300 members including, private companies, cities, chambers of commerce and higher education institutions. While he will be in Texas, he will remain an active member of the Quello Advisory Board. 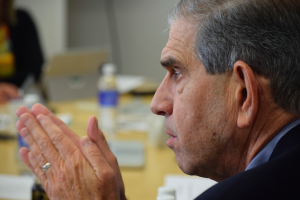 Well before this appointment, Jim has been highly regarded in Texas. He recently stepped down as the President, Professor of Communication and Professor of Public Affairs at University Of Texas at Arlington. Before going to UT Arlington in February 2004, he was Dean of Michigan State University’s College of Communication Arts and Sciences (from 1996 to 2003). As Dean, Professor Spaniolo oversaw an enrollment increase of more than 1,000 students and helped establish the James H. and Mary B. Quello Center, raising more than $3.5 million, which has grown to $5 million. Mr. Spaniolo was also a Professor in the School of Journalism and taught courses on the First Amendment and communications law. Before his tenure at Michigan State, Mr. Spaniolo was Vice President and Chief Program Officer of the John S. and James L. Knight Foundation, the largest media-related private foundation in the United States with more than $1.5 billion in assets. Mr Spaniolo graduated with high honors from Michigan State in 1968 with a B.A. degree in political science. He then earned a law degree from The University of Michigan Law School in 1975 and a master’s degree in public administration from The University of Michigan Institute of Public Policy Studies (now the Gerald R. Ford School of Public Policy).