From the Detroit Free Press (bolding is mine):

Businessman Dan Gilbert is not only buying dozens of buildings in downtown Detroit, he’s also linking them with some of the fastest Internet connections anywhere.

Gilbert, founder and chairman of Quicken Loans and Rock Ventures, said this weekend he has formed a new “community investment initiative” called Rocket Fiber LLC to provide faster Internet connections in downtown Detroit…Construction is already underway…in the greater downtown area. Eventually the goal is to expand the service to other parts of the city.

Even if Gilbert’s venture decides it’s not economical to extend fiber to every (or even most) locations in the city (a decision that strikes me as very likely), it might be willing to extend high-capacity fiber trunks around the city to feed wireless access links that use unlicensed spectrum to provide affordable high speed connectivity to more of the city’s homes and businesses.

There are already several grassroots community WiFi networks being deployed in neighborhoods around the city by a group called Detroit Digital Stewards, under the Allied Media Projects (AMP) umbrella.

If the price of connecting to Rocket’s fiber trunk lines is low enough, this model could support inexpensive high-speed connections deployed neighborhood by neighborhood by groups like Digital Stewards, which isn’t just focused on connectivity, but also on developing applications that support community development.

It will be interesting—and perhaps important for Detroit’s revitalization efforts—if “downtown-focused” projects like Rocket Fiber can develop strong cooperative relationships with “neighborhood-focused” initiatives like AMP and its Digital Stewards program.  And perhaps the task of deploying affordable broadband Internet infrastructure—which can support a wide range of revitalization-focused collaborative activities—is a good place to start building such “downtown-neighborhood” alliances.

The Motor City could certainly use a boost in connectivity. According to an analysis of Census Bureau data, Detroit has one of the nation’s lowest rates of Internet access (see tables below). 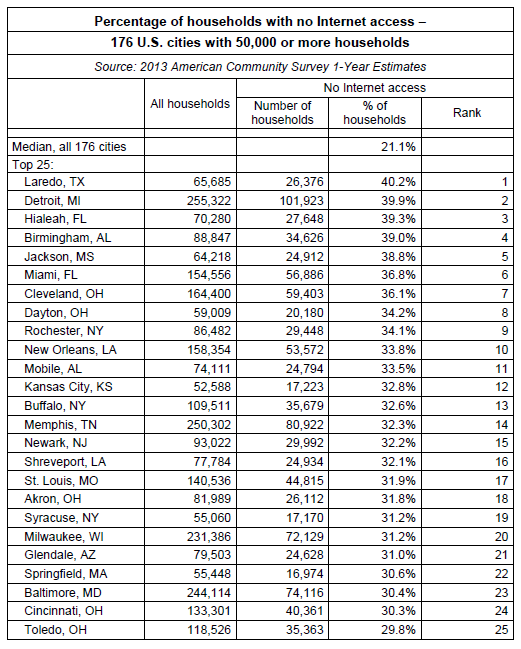 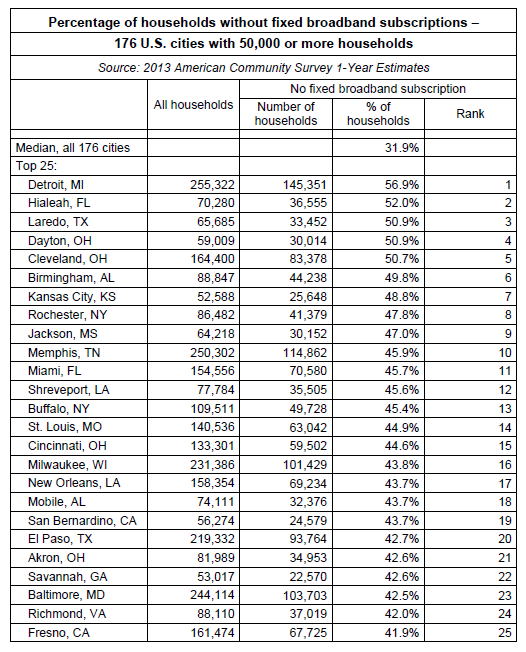