After thinking and writing about the benefits of fiber-to-the-premise (FTTP) networks for a number of years, I’m happy to report that I’ve finally joined the small but growing population of U.S. households connected to the Internet via fiber networks delivering symmetrical gigabit speeds. I’m getting service from LightSpeed, a Lansing-based company deploying its network on a neighborhood-by-neighborhood basis (see this map for more details on the status of its network and service rollout).

The installation happened yesterday (the fiber drop was installed the day before). It went smoothly, with Jeremy and Chris connecting the drop to a fiber network interface in our basement and from there running CAT-5 cable to a router in our living room.  As they worked, they patiently fielded the many questions I had and my long-winded comments about competitive dynamics, policy, etc.

Though my wife and I won’t be accessing the network on a regular basis until we move into our new house next week, I did have the pleasure of watching the Speedtest.net meter zoom up to the 1 Gbps range for both download and upload speeds at the end of the installation process. I also learned that while our fairly old laptops can reach this range when connected to the router via CAT-5 cable, their fairly ancient Network Interface Cards maxed out at around 100 Mbps in both directions when relying on Wi-Fi.  But this was still by far the fastest speeds I’ve ever had in my home, especially in the upstream direction (the photo below shows Jeremy and Chris demonstrating speeds in the 500 Mbps range via a Wi-Fi connection on their newer-generation laptop, after hitting gigabit speeds via a hardwire connection to the router). 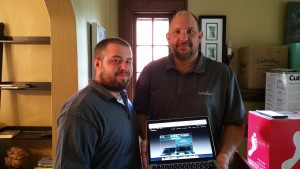 LightSpeed’s monthly price for symmetrical gigabit service is normally $70 (which I believe is also what Google charges in its Google Fiber cities). As an “early adopter,” however, I’m paying only $49 a month, a price that’s guaranteed for two years. Though this price no doubt takes a bite out of LightSpeed’s margin for its “early adopter” customers, it’s likely to help them capture market share as they build out their network. And in a high-fixed cost business like this, penetration is key to both short-term and long-term financial health.

One of the things that strikes me about LightSpeed is that it is not offering the “triple-play” bundle that has been the focus of cable/telco competition for many years. Instead, their value proposition is pretty simple: you get attractively-priced access to the Internet at blazingly fast symmetrical gigabit speeds (hopefully with the kind of reliability fiber can deliver but is much harder to match with the fiber-copper hybrid networks still mainly used by incumbent telcos and cablecos). You then have free rein to make (and change) the online services and devices you use to access the “voice” and “video” applications we once knew as “telephone” and “television.”

I’d love to do a survey of homes in areas served by LightSpeed to get a sense of who (and why and how many) are signing up for the company’s service, and what their experience is like. The obvious (and probably true) speculation would be that it’s mainly younger cohorts (e.g., Millennials), which research has shown account for a disproportionate share of the (cable and wireline telephone) cord-cutter population. That being said, I wonder how many older households, like my own, will jump at the chance to forego bundles loaded with things we don’t want (including extra fees for set-top rentals, etc.) and, instead, to simply get connected to a fast reliable network and then decide—-independent of the business arrangement we have with our network access provider—how best to use that network to support our needs and desires for communication, information, entertainment, commerce, etc.

I also wonder the extent to which the availability in a community of these “simple but super-fast” connectivity offerings will push incumbent providers away from their increasingly artificial “siloing-then-bundling” of services.  There are already signs that this is taking place, though still on a modest and incremental scale.

My own view is that the longstanding focus on multiservice network operator-controlled bundles will continue to erode, especially to the extent that “simply super-fast access” options like LightSpeed expand their footprint.  Among the other factors I see as supporting this shift are: the proliferation and increased penetration of online content and services, including Netflix, Hulu, YouTube and online-only options from longtime cable TV anchor service HBO;  the increasing penetration and capabilities of smartphones, tablets and other access devices not (or at least less) controlled by network operators and; the ongoing shift in demographics favoring “fast affordable connectivity + apps of my choosing” vs. “a limited selection of bundled options offered by my network operator.”

Though not much can be predicted based on a sample of one, what I can say at this point is that I look forward to my own household’s transition down this road, which combines much faster and more reliable, symmetrical and affordable network access with expanded freedom of choice.  And, as both a customer and industry observer, I hope that the increasingly healthy competitive environment emerging in the Lansing area remains so, and breeds increased innovation, investment and consumer choice.