Compiled by Lauren Lincoln-Chavez for the James Quello Archive

James Henry Quello (April 21,1914-January 24, 2010) was born in Larium, Michigan, a northern Italian copper mining colony. In the 1920’s, the Quello family relocated to Detroit, where Quello’s father opened a grocery store in Highland Park, later working for Ford Motor Company as a factory worker and foreman. In a neighborhood dominated by the Klu Klux Klan, James H. Quello experienced discrimination and racial violence due to his Italian-American heritage. He describes his early years as where he “start[ed] becoming a strong believer in self-defense in school and in life.” After prohibition was repealed, the Quello family returned to Larium, opening a thriving saloon across from the police station.
As a college student at Michigan State University, Quello served in the ROTC and pursued journalism with the intention of becoming a newspaperman. He worked multiple positions for MSU’s college newspaper, including columnist and editor, and served as a newscaster on WKAR; a 500-watt college radio station. He graduated with a Bachelors of Art from the College of Arts and Letters in 1935 and was awarded an honorary Doctor of Humanities degree in 1977 from Michigan State University. In 1975, he received an honorary Doctor of Public Service from Northern Michigan University.

A World War II hero, James H. Quello served as a Lieutenant and Lieutenant Colonel, earning several commendations for his service. He survived amphibious landings in Africa, Sicily, Italy, and France, and assault crossings on the Rhine and Danube in Germany. In addition to serving as Lieutenant of the infantry, Quello was paid to write articles for service papers. At the summons of Lieutenant Colonel Sandlin, he witnessed the horrors of the Dachau concentration camp before it was deemed off limits. At the end of the war, Quello was assigned to Camp Blanding, Florida, to train an infantry battalion in preparation for Japan.

In July 1945, James H. Quello began his position as Publicity Director for the Lone Ranger and Green Hornet at the WXYZ-AM Detroit station, where he became the personal liaison between Bing Crosby and the ABC radio network. After WXYZ-AM station was purchased by the ABC network Quello took a position as General Manager at WJR-AM, the dominant 50,000-watt clear channel station. Later, he was promoted to Vice President, where his broadcast executive leadership was distinguished by a doubling in WJR (FM)’s power, the implementation of affirmative action policies, and the placement of J.P. McCarthy in a key drive-time spot; where he was the highest rated morning man for 28 years. Under Quello’s leadership, WJR was awarded numerous awards and citations.

James H. Quello had extensive involvement in the Michigan Association of Broadcasting (MAB), where he served as president and government relations chairman. He was appointed by four different Mayors to serve as a member of the Detroit Housing and Urban Renewal Commission for a total of 21 years, where he advocated for open occupancy and low-cost housing for minorities. He also served as a trustee on the Michigan Veterans Trust Fund for 22 years, where he was appointed by four different Governors, and facilitated innovative initiatives. Quello’s broadcasting career provided a practical foundation for his career as an FCC Commissioner and Chairman (1993).

James H. Quello’s 24-year career as an FCC Commissioner, 1974-1998, was greatly influential, assisting the FCC in ushering in revolutionary technological changes during a global cultural shift in media and communications. His advocacy for communication and broadcasting policies brought new telecommunications options to the American public through the development of cable and satellite TV, high-definition digital broadcasts, and personal communications services. Quello’s regulatory philosophy was guided by a desire to create flexible policies to accommodate quickly changing technologies, as the world began to expand through economic and political initiatives into new territories, technologies, and cultures. 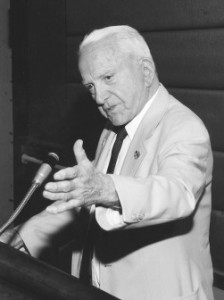 Known for the longest and shortest confirmation hearing, 8 days and 15 minutes, respectively, James H. Quello was first appointed as an FCC Commissioner in 1974 by President Richard Nixon on the recommendation of the Vice President, Gerald Ford, who built his political career representing Michigan in the House of Representatives until 1973. Despite Quello’s bipartisan support, his appointment was heavily contested by Ralph Nader, who viewed Quello as a pawn of the radio and broadcasting industry. Throughout his career as an FCC Commissioner, James H. Quello advocated for equal opportunity; minority ownership; affirmative action policies; free universal television; and deregulation; taking a strong position against sex and violence in television broadcasting, and financial interest and syndication rules. He heavily pursued the fining of shock-jock Howard Stern for anti-indecency rule violations.
Commissioner Quello was a champion for public broadcasting; committed to free over-the-air broadcasting, deregulation, and limiting violence in television broadcasting. He assisted with the modernization of broadcasting transmission systems, bringing HDTV into the modern age with minimal government oversight. A strong proponent of must-carry rules and retransmission consent, he believed these regulations would be beneficial for broadcasters and viewers. Commissioner Quello served as Chair of the TCAF committee, providing assistance to public broadcasting stations seeking financial stability. In the final year of his career as an FCC Commissioner, James H. Quello worked on the 1996 Communications Act, enabling cross-ownership between telecommunications companies; designed to foster marketplace competition, but which was followed by greater concentration of media ownership.

As a supporter of freedom of speech and First Amendment rights, Commissioner Quello supported the deregulation of commercial limitations in television broadcasting (1981). He adamantly argued against the imposition of three hours of educational programming in children’s television programming, contending that educational programming regulations would impose on First Amendment guarantees of freedom of speech, and quantitative regulations would be difficult to uphold in court. He later reversed his position in 1996, after outraged demands from congressmen and senators.

During his career as a Commissioner, the FCC initiated affirmative action policies utilizing rigorous standards of equal opportunity employment to increase minority hiring and ownership in broadcasting. Licensees were required to understand the community they served and make efforts to recruit employees represented in the community. In 1977, the Commission adopted affirmative action policies for the review guidelines for EEO license renewal, requiring an in-depth staff review for stations with six to ten full-time employees and no minority or female employees. In 1980, the Commission tightened the EEO review policy, increasing the standards for equal opportunity employment in the broadcasting industry; imposing sanctions on broadcast stations that did not provide opportunities to minorities.

James H. Quello was a consistent advocate for the review of ownership rules. He was the first FCC commissioner to demonstrate support for minority ownership, advocating for affirmative financing policies in commercial broadcasting station ownership. Commissioner Quello also pushed for distress sales to minorities at 75% of appraisal value versus license revocation and for tax certificates with tax breaks for minorities. Clear Channel Communications was the first network to sell a broadcasting station to minority owners, as they were forced to divest due to ownership limitations imposed by the FCC. Commissioner Quello supported improvements to UHF broadcasting to facilitate the development of local public broadcasting initiatives and minority ownership.

Considered the “Father” of Personal Communication Services (PCS), Quello’s initiative helped spurr the development of the cellular industry. Quello served on a commission, which established the regulatory framework for PCS; developing the band plan and regulatory scheme for private land mobile devices. Quello’s staff advocated for a regulatory framework of the Low Earth Orbiting Satellites (LEOS), that made mobile communications globally feasible. Commissioner Quello ushered in a vision of global communication networks.

In 1993, James H. Quello was appointed Acting Chairman by President Bill Clinton, during which the FCC Commission implemented the Cable Act; imposing rate regulations on cable television broadcasting and lifting long-standing restrictions on television networks from entering the market for reruns and syndication. Congress granted the FCC auction authority, raising over $20 billion for the U.S treasury. Additionally, the FCC cleared the way for new wireless phone and two-way data services, expanding opportunities for personal communications services globally. His tenure as Acting Chairman was lauded as a period of transparency and collaboration.

In 1998, James H. Quello assisted James Spaniolo, Dean of the College of Communication Arts and Sciences, in the development of the James H. and Mary B. Quello Center for Telecommunication Management and Law at Michigan State University, as a multi-disciplinary center within the Department of Media and Information. The Quello Center’s original mission was to support social research of changing communication technologies, industries, and consumer choices through rigorous interdisciplinary research initiatives, global professional opportunities to facilitate cross-disciplinary dialogues, participation in communication policy developments, and expertise and independent research for public and nonprofit institutions. This mission remains central to the Quello Center moving into the digital age. Quello played a major role in the development of the Quello Center, helping to generate over 200 gifts for the Center through a general endowment that has grown to $5 million by 2017. James H. Quello died on January 24, 2010, at the age of 95, in his home in Alexandria, Virginia. 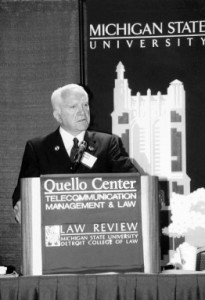