Quello Advisory Board Member, John D. Evans, Chairman and CEO of Evans Telecommunications, was inducted on Monday night, May 16, 2016, into the US Cable Industry’s Hall of Fame. At a gala event held at the Westin Boston Waterfront Hotel, John was honored along with other inductees, including Tom Rogers, Chairman of TiVo; Bob Stanzione, Chairman and CEO of Arris; Mika Brzezinski and Joe Scarborough of MSNBC’s Morning Joe; Pat Esser, President of Cox Commmunications; and John O. “Dubby” Wynne, Retired President and CEO of Landmark Communications. Over the past 20 years, only 118 individuals have been so honored.

John wrote to the Quello Center, that “I am both honored and humbled by my selection and induction Monday night. It was an extraordinary event with over 600 Cable Industry luminaries and leaders in attendance. I wanted to share the event video, pictures and my remarks with you given that Jim Quello played such an important role in my life.” 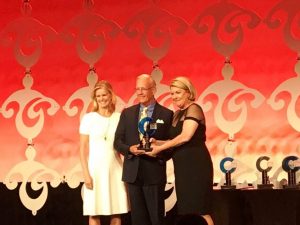 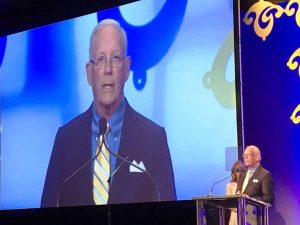 A video about John’s career was shown before bringing him on stage to receive the award and share his own remarks. His remarks, recorded by CNN’s Javier Morgado, and highlighting the industry’s commitment to diversity, can be viewed here.

I closing, John noted that “In many ways I share this honor with you, since I am the sum of all who have coached, mentored, taught and supported me … so thanks to many of my friends at MSU for their support, counsel and friendship over so many years.”

The video of John Evan’s career featured a photo of him with James Quello, who would have been so proud of his accomplishments. The Quello Center and all of his colleagues on the Advisory Board, congratulate him on this well deserved honor. We are as proud as ever to have him on the Board.

John Evans CHOF Remarks May 16 from Quello Center on Vimeo.