Optimism Prevails in Opinions on the Future of Detroit

Optimism Prevails in Opinions on the Future of Detroit

Conversations about the prospects for Detroit’s future often expose a divide between those who see the city recovering from a decline in population and financial vitality and those who have given up on the city’s recovery. As part of a research project on the role of the Internet and new media in the development of Detroit, the Quello Center surveyed a random sample of Michigan residents about their perspectives on the future of Detroit. Conducted as part of MSU’s State of the State Survey (SOSS), the sample included nearly 1,000 respondents. Each respondent was interviewed over the phone through random sampling of mobile and fixed-line phones in Michigan.

The results show a divided public, but one in which positive views on the prospects for Detroit far outweigh more pessimistic viewpoints. We asked respondents: “Do you believe that the City of Detroit will decline or improve over the coming years?” More than 7 of every 10 respondents expected the city to improve in the coming years (Figure 1). Just under a quarter of respondents (24.8%) said that they expected the city to decline. Only a small proportion (4.7%) thought the city would stay about the same as today.

Moreover, Michigan residents are more positive about the future of Detroit in 2016 than in 2008, five years before the city of Detroit became the largest municipality in the United States to file for bankruptcy on July 18, 2013. In 2008, there was a more equal split among Michiganders, with 27.7% expecting the city to decline, and a slightly larger proportion (32.3%) expecting it to improve. Fully forty percent (40.1%) expected the city to stay in the same situation in 2008, compared to less than 5 percent in 2016. The drop in those expecting things to change might have declined due to a change in response categories, but opinion has clearly shifted to a more positive outlook for Detroit in the post-bankruptcy environment.

Figure 1. Michiganders Optimistic About the City of Detroit’s Future 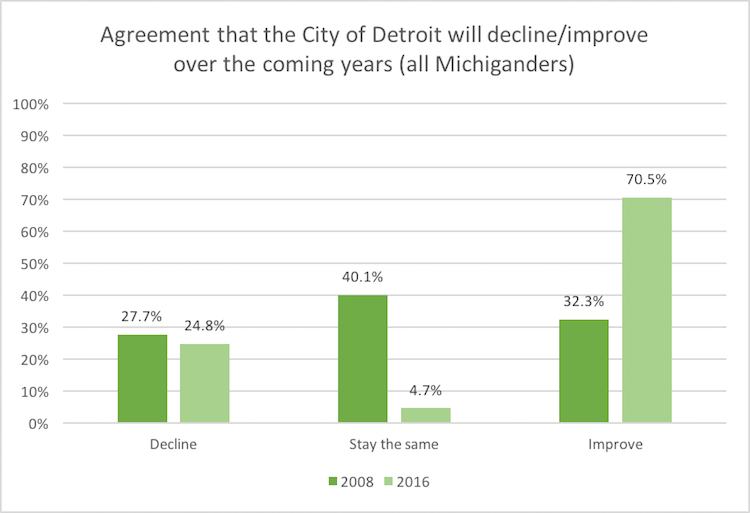 However, not all Michganders are alike in their views. Those who are more positive are more likely to be African-American, female, have incomes above $30,000 per year, and live inside the city of Detroit. Detroit residents were more positive in both 2008 and 2016, but race and gender differences were particularly marked and changed overtime. 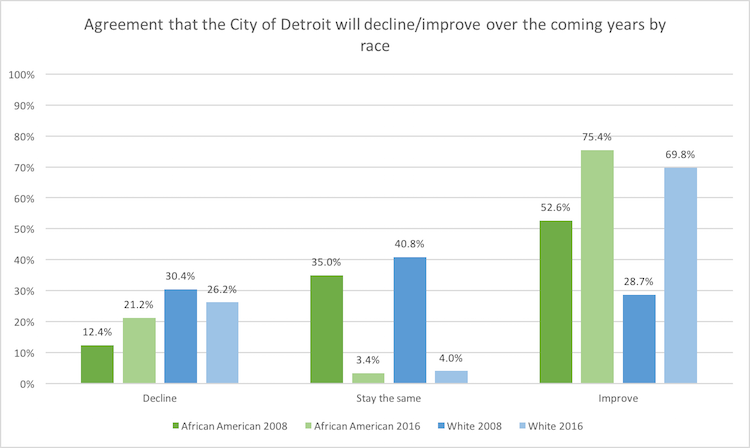 With respect to gender, Figure 3 shows that more women were pessimistic than men (29.6% of women thought things would improve, compared to 35.2% of men), and proportionately more women were likely to believe things would stay the same (44.2% of women, compared to 35.6% of men). However, by 2016, this had reversed, with 74.1 percent of women believing things would improve for Detroit, as compared with 66.9 percent of men. More men and women were optimistic in 2016, but the gain among women surpassed that among men (Figure 3). 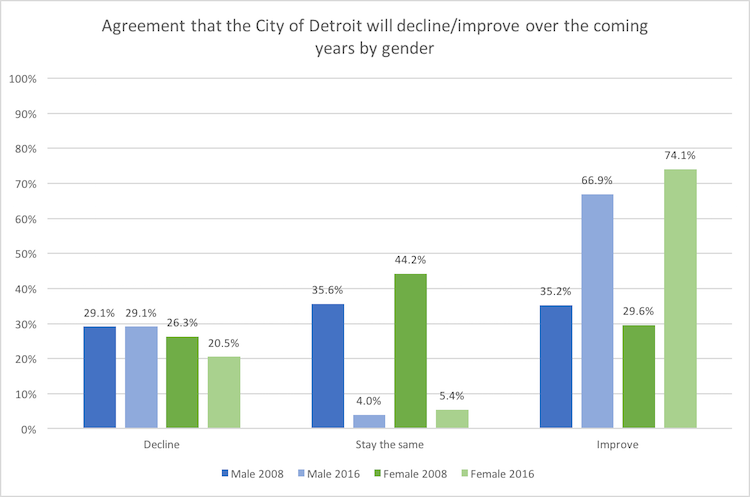 It is difficult to anticipate the consequences of this shift in opinion. It is possible that a more positive outlook within the population—especially within Detroit itself—will contribute to supporting a growing number of initiatives underway in the central city and neighborhoods of Detroit, ranging from tech startups and urban farming to programs for vulnerable residents in distressed areas of the city.

The Quello Center will continue to follow shifting opinion as it studies the role of the Internet in networking collaborative efforts and opening access to information to its residents in order to support urban development and citizen engagement.

Dr Bibi Reisdorf or Professor Bill Dutton at the Quello Center at Quello@msu.edu

The State of the State Survey (SOSS) is organized and directed by the Institute for Public Policy and Social Research (IPPSR) at Michigan State University. See: http://ippsr.msu.edu/survey-research/state-state-survey-soss

Information about the ICT4Detroit Project of the Quello Center is available at: https://quello.msu.edu/research/ict4detroit-the-role-of-ict-in-collaboration-for-detroits-revitalization/