Should the FCC price-cap business broadband?

Last month, prolific telecomm researcher Susan Crawford wrote about the multi-billion dollar market for business data services (BDS). This market consists of “middle mile” networks used to connect consumers and businesses across cities and neighborhoods. As I explained in a 2016 Quello Center presentation concerning this market (previously referred to as “special access”), these connections, which are owned by “local exchange carriers,” are used, for example, by large businesses to facilitate intranet communication, by cell-phone providers to funnel voice and data traffic between towers, and by banks to connect to their ATMs. Incumbent local exchange carriers (ILECs) also wholesale business data services to rival, competitive local exchange carriers (CLECs), who compete with them head on. 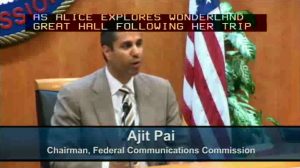 Ajit Pai reciting Lewis Carroll’s parable on the dangers of over-regulation in the communications sector.

Professor Crawford’s concern, and that of others before her,[1] is that unregulated ILECs will exploit their monopoly power to keep prices high and competition out. As Crawford notes, following a massive data collection to analyze the BDS market, in 2016, the Commission appeared on the cusp of extending regulation in this market, but reversed course following the 2017 change in leadership (see 2017 Commission Order here). In particular, the FCC provided that there would be no new regulation of packet-based BDS, and that the continuation of currently regulated TDM-based services would be determined by a market test that Crawford called “unbelievably counterfactual [and] low.”[2]

The regulation in question is price-cap regulation of ILECs’ wholesale and retail prices, which, in markets deemed not to be sufficiently competitive, constraints the prices that ILECs charge for various regulated business-data services that they offer. As my former FCC colleague, Omar Nayeem, and I show in a recent theoretical working paper motivated by the FCC’s BDS proceeding and set to be presented at next month’s TPRC conference, while the case for price-cap regulation appears rather strong, Chairman Pai is justified in his evident concern about the potential deleterious effect of regulation on competition.[3]

In our work, Omar and I study a setting in which an ILEC sells business data services in the (enterprise) “retail” market as well as to a potential CLEC, who purchases access to ILEC networks and/or facilities and resells it in the retail market.[4] Our interest is in the static welfare and dynamic investment ramifications of price-cap regulation in this market relative to what would happen without price-cap regulation.

Static Welfare Results: In our static analysis, we consider profits and consumer-surplus levels that would prevail if the FCC capped the ILEC downstream (retail) and wholesale prices for BDS at marginal cost as well as those that would prevail without price-cap regulation. Our interest is not on a comparison of these two scenarios—ILEC profits are obviously lower and consumer surplus higher following price-cap regulation—but rather how the relevant regulatory regime affects competition and incentives by ILECs to foreclose potential entrants.

To our surprise, we discovered that, when price-cap regulation is not in place in such a market, CLEC entry, at least in theory, leads to what Chen and Riordan (2008) have dubbed “price-increasing competition.” That is, the ILEC ends up setting higher prices following CLEC entry than it would as a monopolist. This occurs because the ILEC can exploit its control over the wholesale price of BDS to force the CLEC to set a high retail price, which mitigates the negative impact of entry on the ILEC’s retail sales. In addition, when the wholesale price is high, the incumbent incurs a greater opportunity cost of lowering its price through lost unit sales to the entrant. Thus, the entrant’s reliance on the incumbent in the upstream market undoes the typical effect of entry, which normally is a disciplining force on the incumbent’s retail price.

Naturally, the price-increasing competition that follows wholesale entry can lead consumers to be worse off than they might be under an ILEC monopoly. By forbidding price-increasing competition, price-cap regulation ensures that consumers are better off (because of their increased choice) following entry than they would be under a price-capped ILEC monopoly. Importantly, we find that price caps should not raise any concerns about foreclosure. In particular, the ILEC does not have an incentive to foreclose the CLEC when it is price-cap-regulated unless it also has that incentive in the absence of price caps. The intuition for this finding is rather straightforward: when ILEC retail prices are capped at marginal cost, the only way it can now earn positive economic profit is by selling to the CLEC at wholesale to save on any downstream retailing costs.

Dynamic Investment Results: Though Omar and I investigate the impact of price-cap regulation on both ILEC and CLEC investment incentives, for brevity (as if this blog post weren’t already long enough), I discuss here the impact of price caps on CLEC investments to self-provision. In other words, Omar and I ask the following question: might there be situations under which the CLEC would choose to invest in its own duplicative network facilities to obviate its reliance on wholesale BDS when the ILEC is not price-capped, but choose to continue to rely on wholesale BDS under price caps? Conversely, what about the other way around?

The answer is ex-ante unclear. Under regulation, the ILEC’s initial downstream price is relatively low (equal to marginal cost) and does not drop following self-provisioning (whereas it would drop without price caps as the ILEC responds to its competitor by lowering its price). This means that, under regulation, self-provisioning does not elicit a major competitive response from the ILEC, giving the CLEC a stronger incentive to do so. However, under regulation, the initial wholesale price is low as well (also equal to marginal cost), so that self-provisioning does not lead to as much of a marginal cost reduction as it would in the scenario without price-caps, in which the wholesale price is initially high. What we find is that the latter effect dominates under most reasonable values of the relevant parameters.

If the CLEC has a sufficiently low fixed cost of self-provisioning, it will do so regardless of the presence of price-cap regulation, whereas, if that fixed cost is sufficiently high, the CLEC will remain a wholesale entrant regardless of the regulatory regime. The significance of our finding is that, under most parameter specifications, there is an intermediate range of fixed costs of self-provisioning whereby a CLEC might invest in the scenario without regulation, but would not do so under price-caps.

The idea that regulation might forestall investment is far from new in telecommunications. In the debate over net neutrality, opponents frequently touted the likely deleterious effect of net neutrality on broadband investment.[5] Similarly, in various proceedings involving roaming by wireless service providers, opponents of FCC roaming regulations were concerned with attempts by rivals to “piggy-back” on their networks.

What we find is that this concern is relevant in the context of price-cap regulation as well. However, whether this concern justifies FCC actions to reduce the scope of price-cap regulation is an empirical question we leave for future researchers. In our work, Omar and I found that price-caps have positive social effects, both static and dynamic (though the latter are not discussed in this post). These benefits must be weighed against the concern about forestalling entrant investment.

[1] See, for instance, two posts from the Benton Foundation here and here.

[2] Unlike more recent packet-based technologies, time-division multiplexing (TDM) transmits signals by means of synchronized switches at each end of the transmission line.

[3] Most of the analysis in this work was performed while I was at the Quello Center and Omar was an economist at the FCC. In particular, the analysis was begun during the Wheeler administration and completed during the Pai administration, and represents the opinions of the authors, not the FCC or any of its Commissioners.

[5] George Ford discusses this concern and takes a straightforward econometrics approach to try to answer this question here and in other Phoenix Center Perspectives.