Stimulating Perspective on Free Digital Society by Richard Stallman: Not So Free?

Yesterday afternoon, April 11, Richard Stallman, President and Founder of the Free Software Foundation gave a rather comprehensive and critical perspective on the ways in which our digital society is not meeting his definition of a free society. His talk, entitled ‘A Free Digital Society’ began with a focus on free software, meaning software that does not control the user – as users control free software. He developed a set of criteria for the requirements underpinning free software over the first hour of his talk, what he called the four freedoms. To Stallman, free software is a basic human right.

During the second hour, he moved through a litany of other problems with a free digital society, including surveillance, censorship, Internet services, which collect personal data, electronic voting, and the war on sharing around copyright – all of which paint a pretty grim picture of our not so free digital society. I found this to be quite stimulating since we have had decades of discussions about computer-based communication and information technologies like the Internet as ‘technologies of freedom’. It is so important for these widely accepted views to be challenged by critics as sharp as Richard Stallman. 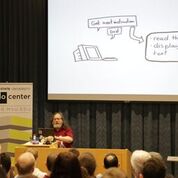 His talk filled our large lecture hall to standing room only, and we had more people lined up for autographs of his book at the end of his two and half hours of his talk and Q&A that attend most lectures. We will post the talk online in due course. 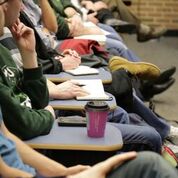 Richard Stallman graduated from Harvard University with a bachelors degree in physics, and went on to work for the AI Lab at MIT before founding the Free Software Foundation. He has won many honors and awards, from honorary doctorates to a MacArthur Foundation Fellowship. He has been a pioneer not only in free software, but also in coining the term ‘copyleft’. I had a fascinating discussion with him about Joe Weizenbaum, the author of Computer Power and Human Reason, who wrote about the ‘hackers’ in the AI lab, when the concept of the hacker was defined by their work ethic and not at all by security.