The Quello Center organised a DC Policy Forum about the future of the FCC and its role in the regulation of digital media. Moderated by Richard Wiley, the panel featured individuals with years of experience in the regulation of communication in a discussion that ranged across a wide array of issues. 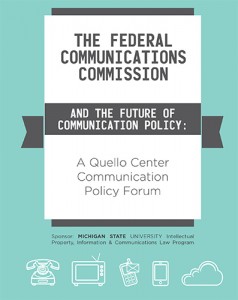 Monday of this week would have been Jim Quello’s 100th birthday. For 23½ years as a Commissioner, including nearly a year as Acting Chairman, Jim helped the FCC and the United States chart a path through a period, when like today, rapid changes in the communications sector and its core technologies posed challenges to established regulatory paradigms. Jim’s 100th birthday is an opportune time to reflect again on the FCC’s role in communications policy and how the Commission might best help the U.S. reap the benefits from technological advances in the communications sector.

C-SPANFCCPolicy ForumQuelloRichard Wiley
Interview with Alessandro Acquisti, speaker for the 2013 Quello Lecture: Privacy in the Age of Augmented Reality
Net Neutrality: Will the way we use the Internet change?