The FCC Spectrum Auction and the Future of Public Broadcasting: The Case at MSU and Greater Lansing

Michigan State University (MSU) held a lively forum on 4 January 2016 to discuss the pending decision by the university on whether or not to participate in the FCC’s spectrum incentive auction. A second forum will be held on the 11th of January at 7pm in the College of Communication Arts & Sciences.

What might sound like a technically and financially arcane set of issues came to life for many in the questions of the 300 some participants who packed the auditorium on the 4th of January. It appeared as if every-other person attending the forum had their hand up at some point to comment or ask a question. Credit to MSU for holding these forums, and to the University’s President, Lou Anna Simon (2015), for being interviewed on WKAR’s ‘Current State’ in December about the pending decision.

If MSU were to auction off its broadcasting spectrum, as explained at the forum, this would spell the end of over-the-air (OTA) broadcasting of WKAR public television. Not being over the air, it will lose its financial support from the Corporation for Public Broadcasting, and its must carry status for cable and satellite providers. While it will not affect WKAR radio, it would threaten the existence of public broadcasting in the greater Lansing community, and similar communities, as well as the vitality of public broadcasting nationally (CPB 2014: chapter 3). Not surprisingly, the audience on 4 January was ‘overwhelmingly negative’ (Wolcott 2016). 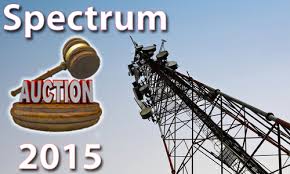 As the auction suggests, the ‘incentive’ is financial. Potentially hundreds of millions of dollars for the University, with no strings attached on how it is spent. However, there are seriously hard questions that need to be addressed before deciding whether such eye-watering payoffs for the University would really be a windfall or even justified at this point in time.

First, the same spectrum is likely to increase in value in the near future. Wireless is the most dynamic, fastest growing infrastructure for the development of innovative approaches to connectivity generally, but also mobile Internet, the Internet of Things, and future sensor networks associated with intelligent cities and transportation (Dutton et al 2014). There is little question that wireless spectrum is poised to become far more valuable than it is now, and within a short space of time. There is almost no question that any price MSU receives now will be short of what it will be worth in the space of 5-10 years. So is this too soon to auction it off, even if viewed on purely financial terms?

Secondly, those in the community who depend on OTA television will lose access to public television, and WKAR in particular. Only about three-fourths of Michiganians are online. In central Lansing, this could be closer to fifty percent. And many residents of the greater Lansing community are dependent on over-the-air broadcasting. The elderly, minorities, rural residents, and the less well to do, are among the most dependent on OTA broadcasting, and most in need of good high-quality programming, educational, and public-oriented programming (Lawson 2015).

Many believe that the Internet and related digital media will compensate for this loss. The idea is that digital media, such as the Internet, can be used to replace lost spectrum. In the short-term (for the next 5-10 years at least) this is a false hope. There are a growing number of ‘cord-nevers’ (never subscribing to cable or satellite services) and cord-cutters (those who stop subscribing) because they rely more on Internet access and streaming video services. This will reduce the likelihood of cable and satellite providers carrying public broadcasting.

Moreover, the fact that more people are moving to view television and film content over the Internet is not to say that everyone is. The reality is far from this imagined future. Digital divides in access to the Internet have been persistent in developed nations, such as the United States, and will not be closed in the next five to ten years. Michigan is about average among states across the US in access to the Internet, but that covers up major variations across socioeconomic groups, where access is dramatically variable.

Nor will the divide be fixed by other technical innovations. A digital switchover could provide better OTA broadcasting and more capacity, but that will not happen for years. New standards, such as ATSC 3.0 (Advanced Television Standards Committee 3.0), could diffuse as early as 2017. This new standard would improve the quality, spectrum efficiency, interactivity and mobile access, compared with current 1.0 standards, enabling a station like WKAR to broadcast content simultaneously receivable on phones, tablets, computers and home TV displays of standard, high definition and the ultra high def 4K video. ATSC 3.0 would be a ‘game changer’, but WKAR could not seize these opportunities if it lost this spectrum a year before they become active (Reid 2006). Moreover, the use of other platforms (e.g., Internet streaming, cable) comes with additional costs both for the content producer (should MSU continue to be) and the audience. An Internet provision of Lansing’s public television content would need huge funding to be competitive to viewers when TV remains the dominant media for news and entertainment. So again, with patterns of use still lagging far behind developments in new technology, is it too soon to cut off many in the community from over-the-air public broadcasting?

Thirdly, the spectrum was loaned to MSU for the purpose of providing public service broadcasting and information. All scenarios of this auction suggest that the funds received would be repurposed for other activities that might merit support on their own terms, but will not fulfill the public broadcasting purposes that formed the basis for MSU obtaining this spectrum. For example, the President of MSU suggested the proceeds could be placed into MSU’s endowment as a means to ensure its longevity, even though it is not a gift per se to the university (Simon 2015).

This is not a legal issue so much as one of public and community trust in the University fulfilling the spirit of public broadcasting or any other purpose for which money is given. The idea that the same content will be provided via other channels – meeting its obligation – is not plausible with the loss of PBS support and must carry status.

Finally, a number from the audience of the forum raised concerns over MSU losing a major platform for teaching. Many students are drawn to MSU to study broadcast production, and media production, generally. It is true that there are good universities, with strong schools of communication and media studies that do not have a public television studio and station. But why surrender one of MSU’s differentiating, strategic advantages in attracting and training its undergraduate students? It may be that more of a role in teaching could, and should, be made of WKAR’s presence at MSU, but auctioning off its OTA broadcast channel would undermine these opportunities.

In short, there are real issues revolving around the financial wisdom, public service obligations, the regional community, inequities, and educational opportunities tied to this decision. From my perspective, it is not simply an issue of either/or, but also of timing. I hope I am not seen as one of those so-called ‘naysayers’, to use Mark Bashore’s term in his interview with President Simon. Five to ten years from now, it is most likely that the spectrum will be far, far more valuable, and more people will be digitally connected, even if not online. Whether based on a matter of principle, or sound financial management, it might well be best to relinquish at this time.

So I am delighted that MSU is continuing to explore these issues. Perhaps there is good evidence to challenge each of these reservations I’ve outlined. In that spirit, I am looking forward to the second forum, and the potential to follow the Lansing case as a concrete, real world example of the opportunities, threats, and prospects for public broadcasting in the United States.

Bill Dutton
A personal perspective that does not necessarily represent the views of the Quello Center or any other organization.