David Bray, the CIO of the FCC, will deliver at Quello Lecture on ‘Digital Age Public Service and Information Leadership: Opportunities, Challenges, and Prospects‘ on March 27th for the Quello Center in association with the Annual Conference of the International Telecommunications and Education Research Association (ITERA). The talk will be held at the Crown Plaza National Airport Hotel in Arlington, Virginia, in the late morning, tentatively set for 11:00 am – 12:00 pm. 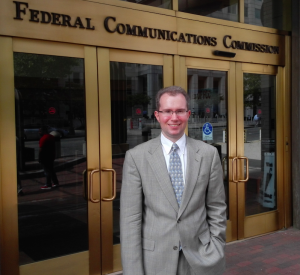 David was a Visiting Doctoral Student at the Oxford Internet Institute when Bill Dutton was Director, enabling them to work together on a project focused on collaborative or distributed problem-solving with Paul David and others at the OII. Dr. Bray currently serves as the Chief Information Officer (CIO) for the Federal Communications Commission but began working on computer simulations for the U.S. Department of Energy at age 15, to later design new telemedicine interfaces and space-based forest fire forecasting prototypes for the Department of Defense. In 2000, he joined as IT Chief for the Bioterrorism Preparedness and Response Program at the Centers for Disease Control and Prevention, leading the program’s technology response to 9/11, anthrax in 2001, Severe Acute Respiratory Syndrome, and other international emergencies. He later completed a PhD in Information Systems from Emory University and two post-doctoral associateships at MIT and Harvard. In 2009, Dr. Bray volunteered in 2009 to deploy to Afghanistan to help “think differently” on military and humanitarian issues and in 2010 became a Service Executive advocating for information interoperability, cybersecurity, and protection of civil liberties. In 2012, Dr. Bray became the Executive Director for the bipartisan National Commission for Review of Research and Development Programs of the United States Intelligence Community, later receiving the National Intelligence Exceptional Achievement Medal. He received both the Arthur S. Flemming Award and Roger W. Jones Award for Executive Leadership in 2013, and currently serves as term member of the Council on Foreign Relations and as an Oxford Martin Visiting Fellow.

To follow plans for this Quello Lecture, see: https://quello.msu.edu/events/action~agenda/page_offset~1/time_limit~1427468401/