University Research: A Skeptical Perspective by A. Michael Noll

University research has skeptically made little contribution to the striking advances in communications technology of the last 50 or so years. This is hardly surprising, since most of the advances came from R&D at industrial facilities. The skeptical perspective in this piece is based on my early experience at an industrial research laboratory, in government, and later at a university. My conclusion is that university research is essential mostly for the education and training of students, who then graduate and conduct meaningful research for industry. 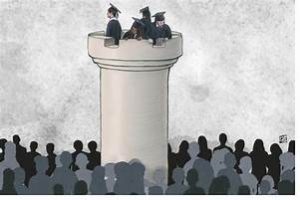 Another technological innovation is the Internet. Was it solely the result of university research? The precursor of today’s Internet was the Arpanet, which utilized packet switching to avoid then costly data service. The Advanced Research Projects Agency (ARPA) of the Federal defense department funded the development of the Arpanet, which was the brainchild of Dr. Larry Roberts, who directed the project at ARPA. Much of the actual development work was done at Bolt, Beranek, and Newman (BBN). Although university people were involved, the Arpanet was not solely the result of university research.

I am not familiar with chemical research and physics, and thus do not know how much practical research has occurred at university facilities. My expertise is in electrical engineering and telecommunications technology. Interesting university research has been done in astrophysics, but little relevance has occurred from this research – it deals with such topics as black holes and distances measured in millions on light years. Decades ago, John McCarthy at his laboratory at Stanford University, and the students he educated did exciting research in artificial intelligence and robotics.

The broader question is what is the purpose and mission of universities, and what is the role of university research? This can become the domain of self-serving opinion. It is a controversial topic with “muddy waters” on its importance depending on personal opinions and perspectives.

Sitting here at my desk with the computer on which I am writing this article, I think of the technology around me. The graphical interface on the computer was invented at the Xerox Palo Alto Research Center (PARC); the mouse was invented at the Stanford Research Institute; researchers at Bell Telephone Laboratories invented the Unix operating system. None of this was university research. Many innovations are the result of discoveries by many researchers at different organizations – credit frequently should be more collectively attributed.

The Federal government through a peer-review process sponsors much university research. The process in seeking support for peer-reviewed research is lengthy and elaborate. It sometimes appears that more thought and effort goes into writing the proposal than the actual conduct of the research. The peer review process assures that the research will be mostly mainstream.

Decades ago, when I worked in Washington and collaborated with the Office of Management and Budget, I wondered whether university research funded by the National Science Foundation was a form of welfare for academics. It was also a reason for being released from teaching a course or two — teaching is real work.

I wonder whether it would be simpler and would result in more innovative groundbreaking research if the university simply supported the research from its endowment and own funds. But these funds would need to be distributed evenly and might not be sufficient to support current levels of research. However, avoiding proposal writing might add efficiency.

The best research supports the mission of the sponsoring organization. The mission of a university is education – not providing telecommunication service, space craft, refrigerators, and so forth. Indeed, the major mission of the university should be education. If doctoral students are to be educated and trained, then they need the opportunity to perform some form of research. After they graduate, these doctorial students then frequently go to work at industry performing practical and relevant work. The career path for doctoral students that seems to be most applauded by the faculty is to graduate and work at another university, where their doctoral students then apply to yet another graduate program – not for industry or on practical problems. “Practical” and “relevant” seem to be characterizations to be avoided at many universities.

Research usually tackled practical problems in support of a real-world mission of the sponsor. A good way for a university to be involved in such research is through a separate for-profit research unit. The researchers would not teach nor be tenured – they would be employees. Patents would be obtained, along with other intellectual property. Students and faculty could also work part-time at the research facility. The management of the research unit would evaluate the research. An issue with university research is that the departmental administration does not evaluate it and instead relies on outside peer review.

The “product” of universities is its graduates. Research universities educate and train doctoral students. As graduates these newly minted doctorates go to work in industry performing propriety industrial research and devolvement. The results of this R&D makes their way back to the university, affecting and refining the topics of research done by faculty and current doctoral students. This is a tight loop.

I have taken a skeptical and controversial tone in this piece. But in the end, what should matter is meaningful research that solves real problems or leads to new knowledge and innovations — not where it is performed. Research should make our lives better through new products and services.

fundingimpactinnovationresearchuniversity
The New Urban Myths of Detroit Internet Use
New Media Addiction by A. Michael Noll