Alexander Heffner on the Future of Quality Broadcast News Media: Optimism or Pessimism?

The College of Communication Arts & Sciences enjoyed a visit by Alexander Heffner, yesterday. Alexander is the host of Open Mind, a pioneering program for public broadcasting which his grandfather launched in 1956. Today, in the digital age, Alexander has relaunched Open Mind, and is speaking at universities across the country about his efforts, and the issues he holds dear around the role of public media in the future of public discourse, news and public affairs. Yesterday, Alex spoke on ‘Millennials, Public Media and The Future of Civil Discourse’, with responses from one of MSU’s Pulitzer Prize winning journalists, Eric Freedman, and one of Quello’s Associate Directors, Gary Reid, director of MSU’s public radio and television station, WKAR. 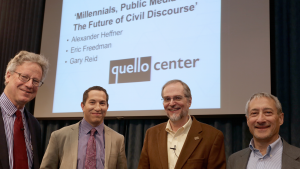 Prior to his lecture, Alex met with Bonnie Bucqueroux’s freshman class JRN 108, with over 100 students interested in the media and society, and then had a box lunch in the Quello Meeting Room with a dozen journalism students interested in broadcasting careers. His lecture and the discussion will be online soon, but in the class, and in the following lecture, I was struck by the basic conversation between optimistic and pessimistic portrayals of millenials, civility in public discourse, and interest in high-quality news and information. Alexander is basically optimistic, or he would not be pursuing his vision. The students seemed generally more optimistic than I expected about the role of social media, for example, as a platform for following the news, but many others during the day saw click rates and celebrity fandom undermining interest and readership of quality news and public affairs. Some journalists argued that nothing has changed with the primary focus remaining on good stories and conflict, but others saw popular news programming creating a culture of conflict and point-counterpoint superficiality versus serious efforts to convey the complexity of public issues.

At the most general level, Alexander’s visit highlighted the issues of funding and producing quality journalism in the digital age of online news and social media. There are many worries that the Internet and new media and new audience practices will undermine the business model of quality journalism, and Alexander seems to be attacking this head-on and making a strong, creative entrepreneurial effort to maintain and enhance an existing stream of work, often using the Internet to support him, such as in building on the archive of brilliant interviews begun by his grandfather.

Today he is speaking with students in our College of Education, but he has left us talking about what we can do to foster informed and civil discourse in the digital age of social media. I am certain that the Open Mind is one programming effort that will help foster a more civil and informed public discourse.