A new experimental broadcast license for WKAR-TV opens the door for broadcast innovation and research at the MSU College of Communication Arts & Sciences. Michael O’Rielly, commissioner of the U.S. Federal Communications Commission (FCC), recently visited Comm Arts and WKAR studios to show support for the deployment of ATSC 3.0 technology and announce the new license. The FCC issued license for WKAR studios allows for the creation of a Next Gen Media Innovation Lab.

Some call it ATSC 3.0, Dutton calls it Next Generation Broadcasting. ATSC 3.0 may have an unfortunate name, according to Dutton, but the potential of this broadcast innovation is generating excitement among public broadcasters, policy makers, College of Communication Arts & Sciences administrators and faculty. Dutton explained the hype and history behind this ambitious initiative to help welcome Commissioner O’Rielly and catch faculty and staff up to speed on ATSC 3.0.

ATSC 3.0 is the merging of broadcasting and the Internet. This new broadcast platform offers the affordances of the Internet, such as customized content and more viewing options (e.g. choosing from various camera angles during a live game), while using a broadcast signal. This allows flexible, adaptable and future focused programming for broadcast television, including public stations like WKAR.

O’Rielly toured WKAR studios and the College of Communication Arts & Sciences before joining the presentations. During his visit, O’Reilly announced that WKAR-TV is the first public broadcasting station awarded an experimental license to use ATSC 3.0 over the airways. Only a handful of broadcasters across the nation will have this unique opportunity, he explained, and WKAR is the only broadcasting station to explore and develop this next generation broadcasting for public television. 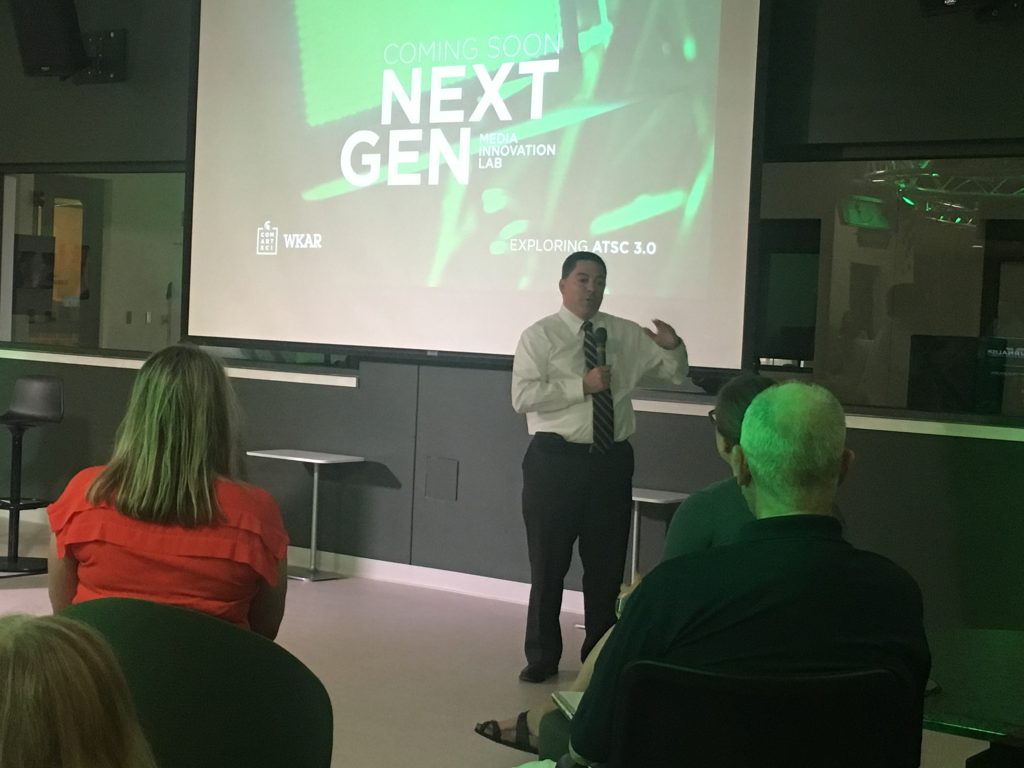 With the experimental license, WKAR studios and College of Com Arts will continue to build a state of the art ATSC 3.0 Media Innovation Lab. Dutton, who was part of a strong group that advocated to save MSU’s broadcast spectrum and establish a center at MSU to experiment with ATSC 3.0, explained the potential behind this cutting-edge broadcast system and reflected on how the university considered auctioning off WKAR-TV spectrum at the FCC Incentive Auction in 2016.

“There was financial incentive, potentially over $206 million” Dutton explained. However, the potential loss of WKAR was met with public backlash when hundreds of people gathered for a forum on the issue in January of 2016. Ultimately, the university decided that the end of over-the-air public television in Lansing, the deepening divides in access to broadcasting and the lost potential for broadcast innovations was not worth the money. With the decision to keep WKAR on the airwaves, thought leaders and advocates like Prabu David, Dean of the College of Communication Arts & Sciences, decided that a partnership between the college and WKAR could help shape the future of broadcast. 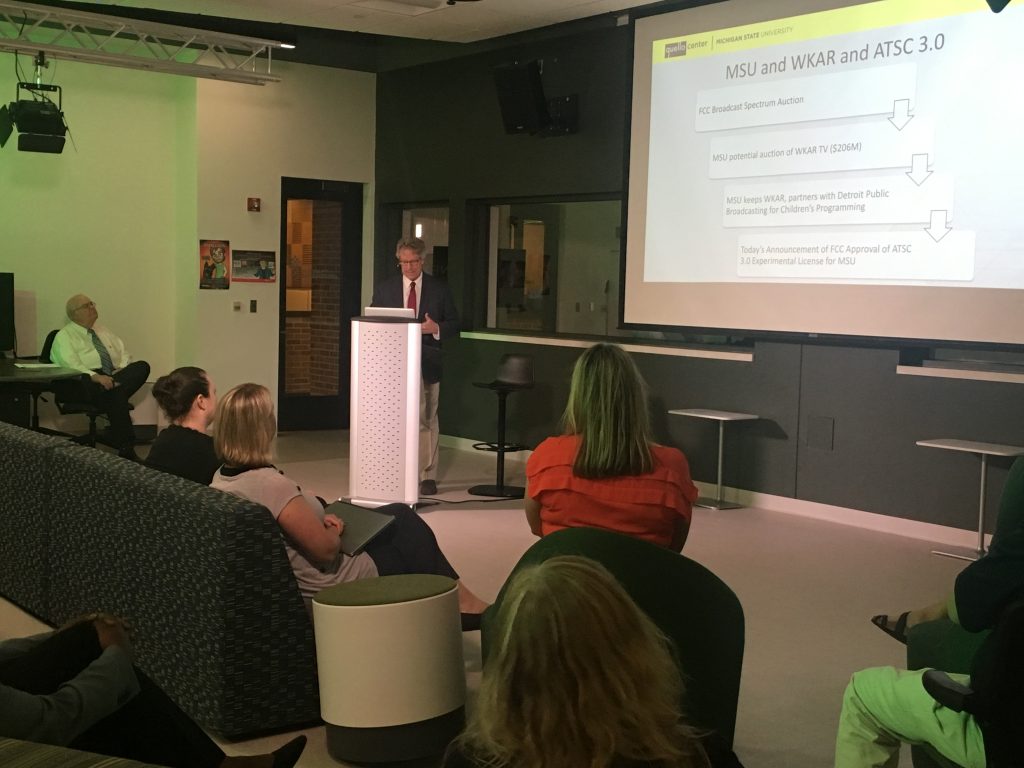 The potential crisis was averted when MSU pulled out of the auction, Dutton said, now we have decisions to make about the potential for research and policy. Among other things, ATSC 3.0 will require policy considerations surrounding issues of localism, diversity, privacy and security. Research is required to determine best practices and inform policy decisions.

The potential for the Media Innovation Lab is immense, Dutton continued, “we can do technical experiments to improve reception in rural areas and distressed areas of Lansing, and we can figure out different approaches to providing two way interactive digital content as well as targeted content.”

Dutton listed other capabilities and considerations for the lab as a testbed for personalization and new applications and services including alerts and information related to health, medical, emergency or public service announcements. The Next Gen Media Innovation lab can serve as a platform for user behavior research related to user adoption of ATSC 3.0, patterns of use and impacts of the technology. Dutton believes that such a lab can help improve public broadcasting in Lansing and attract students to the college who value being at the cutting edge of broadcast innovations.