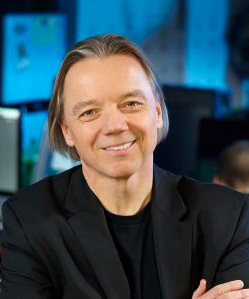 MSU has named Professor Johannes Bauer as the recipient of a Distinguished Faculty Award. Johannes has helped direct the Quello Center and is one of its major researchers. Professor Bauer has gained a reputation as one of the world’s leading scholars in the area of telecommunications policy, with a remarkable record of global engagement, sustained productivity and grant funding. Bauer’s research on the governance of complex network infrastructures has informed policy makers and scholars throughout the world. He has applied economic theory to analyze how malware evolves, which has led to new Internet security approaches, while concurrently developing a distinct theoretical framework for telecommunications policy that is synchronized with his empirical work. Bauer’s unique and informed blending of economic theory, policy analysis and international comparative studies has led to his being sought out for his advice and counsel by the world’s foremost international telecommunications policy institutions, including the Federal Communications Commission in the United States and the United Nations International Telecommunications Union in Geneva. He has been described by a noted law and policy scholar from Harvard as “one of the most distinctive and influential scholars in telecommunications policy in the world today.”

Bauer is widely regarded as an enthusiastic and engaging teacher who encourages active debate in the classroom. An assignment in his graduate communications policy class a few years ago required his students to prepare entries for Wikipedia on communications policy issues as part of a multi-university initiative sponsored by the WikiMedia Foundation. His class was ranked as the strongest in the country in terms of its contributions. An exceptional mentor who always puts students’ needs ahead of his own, Bauer has guided numerous Ph.D. students to successful academic careers in both the United States and abroad. His undergraduate students are equally enthusiastic about his classes, acknowledging him as a brilliant and innovator teacher, whose classes are always enjoyable.

To read about the other winners, visit MSU Today’s article.

awardsJohannes M. BauerMedia and Information
Steven Wildman Appointed As Chief Economist for the FCC
Interview with Alessandro Acquisti, speaker for the 2013 Quello Lecture: Privacy in the Age of Augmented Reality