From discussions in courses and within the Quello Center Advisory Board, the Center has been developing a set of key issues tied to media, communication and information policy and practice. We’d welcome you thoughts on issues we’ve missed or issues noted that do not merit more sustained research and debate. Your feedback on this list would be most welcome, and will be posted as comments on this post. 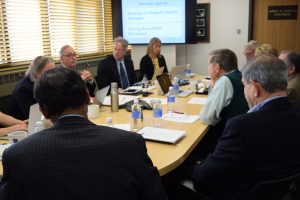 New Developments around Robotics and Artificial Intelligence: What are the implications for individual control, privacy, and security? Security is no longer so clearly a cyber issue as cyber security increasingly shapes the physical world of autonomous vehicles, drones, and robots.

Internet of Things (IoT): With tens of billions of things moving online, how can individuals protect their privacy and safety and well being as their environments are monitored and controlled by their movement through space? There are likely to be implications for urban informatics, transportation and environmental systems, systems in the household, and worn (wearables above). A possible focus within this set would be on developments in households.

Wearables: What appears to be an incremental step in the IoT space could have major implications across many sectors, from health to privacy and surveillance.

The Future of Content Delivery: Content delivery, particularly around broadcasting of film and television, in the digital age: technology, business models, and social impact of the rapidly developing ecosystem, such as on localism, diversity, and quality.

Free (and Open Source) Software: The prominence and future of free as well as open source software continues to evolve. Are rules, licensing, and institutional support, such as around the Free Software Foundation, meeting the needs of this free software community?

Big Data: How can individuals protect their privacy in the age of computational analytics and increasing capture of personal data and mass surveillance? What policies or practices can be developed to guide data collection, analysis, and public awareness?

Encryption: Advances in encryption technologies at a time of increasing threats to the privacy of individual communications, such as email, could lead to a massive uptake of tools to keep private communications private. How can this development be accelerated and spread across all sectors of the Internet community?

Internet2: Just as the development of the Internet within academia has shaped the future of communications, so might the next generation of the Internet – so-called Internet2 – have even greater implications in shaping the future of research and educational networking in the first instance, but public communications in the longer-term. Who is tracking its development and potential implications?

Transparency: Many new issues of the digital age, such as concerns over privacy and surveillance, are tied to a lack of transparency. What is being done with your data, by whom, and for what purposes? In commercial and governmental settings, many public concerns could be addressed to a degree through the provision of greater transparency, and the accountability that should follow.

Censorship and Internet Filtering: Internet filtering and censorship was limited to a few states at the turn of the century. But over the last decade, fueled by fear of radical extremist content, and associated fears of self-radicalization, censorship has spread to most nation states. Are we entering a new digital world in which Internet content filtering is the norm? What can be done to mitigate the impact on freedom of expression and freedom of connection?

Psychological Manipulation: Citizen and consumers are increasingly worried about the ways in which they can be manipulated by advertising, (fake) news, social media and more that leads them to vote, buy, protest, or otherwise act in ways that the purveyors of the new propaganda of the digital age would like. While many worried about propaganda around the mass media, should there be comparable attention given to the hacking of psychological processes by the designers of digital media content? Is this a critical focus for consumer protection?

(In)Equities in Access: Inequalities in access to communication and information services might be growing locally and globally, despite the move to digital media and ICTs. The concept of a digital divide may no longer be adequate to capture these developments.

Privacy and Surveillance: The release of documents by Edward Snowden has joined with other events to draw increasing attention to the threats of mass unwarranted surveillance. It has been an enduring issue, but it is increasingly clear that developments heretofore perceived to be impossible are increasingly feasible and being used to monitor individuals. What can be done?

ICT4D or Internet for Development: Policy and technology initiatives in communication to support developing nations and regions, both in emergency responses, such as in relation to infectious diseases, or around more explicit economic development issues.

Digital Preservation: Despite discussion over more than a decade, it merits more attention, and stronger links with policy developments, such as ‘right to forget’. ‘Our cultural and historical records are at stake.’

Media Concentration and the Plurality of Voices: Trends in the diversity and plurality of ownership, and sources of content, particularly around news. Early work on media concentration needs new frameworks for addressing global trends on the Web, with new media, in print media, automated text generation, and more.

Diversity of Content: In a global Internet context, how can we reasonably quantify or address issues of diversity in local and national media? Does diversity become more important in a digital age in which individuals will go online or on satellite services if the mainstream media in a nation ignore content of interest to their background?

Privacy and Privacy Policy: Efforts to balance security, surveillance and privacy, post-Snowden, and in wake of concerns over social media, and big data. White House work in 2014 on big data and privacy should be considered. Policy and practice in industry v government could be a focus. Is there a unifying sector specific perspective?

Freedom of Expression: New and enduring challenges to expression in the digital age.

Communication Policy: Rewrite of the 1934 Communications Act, last up-dated in 1996: This is unlikely to occur in the current political environment, but is nevertheless a critical focus.

Universal Access v Universal Service: With citizens and consumers dropping some traditional services, such as fixed line phones, how can universal service be best translated into the digital age of broadband services?

Network Neutrality: Should there be Internet fast lanes and more? Efforts to ensure the fair treatment of content, from multiple providers, through regulation has been one of the more contentious issues in the USA. To some, the issue has been ‘beaten to death’, but it has been brought to life again through the regulatory initiatives of FCC Chairman Wheeler, and more recently with the new Trump Administration, where the fate of net neutrality is problematic. Can we research the implications of this policy?

Internet Governance and Policy: Normative and empirical perspectives on governance of the Internet at the global and national level. Timely issue critical to future of the Internet, and a global information age, and rise of national Internet policy initiatives.

Acknowledgements: In addition to the Quello Advisory Board, special thanks to some of my students for their stimulating discussion that surfaced many of these issues. Thanks to Jingwei Cheng, Bingzhe Li, and Irem Yildirim, for their contributions to this list.