“Racism, Sexism, and Video Games: Social Justice Campaigns and the Struggle for Gamer Identity”. This was the title of the first Quello Lecture for the new academic year. Professor Lisa Nakamura introduced several extreme examples of sexism and racism, but the real issue of the lecture and of the audience’s comments was not merely the prominence of some very ugly and disgusting phenomena in the gaming world. Rather, it was the interface between the gaming universe and the real world; it was about culture and culture wars, about social justice warriors, about women and men, about feminism and anti-feminism, and about how relationships travel across these different worlds. And yes, it was about avatars as well.

Racism, Sexism, and Video Games: Social Justice Campaigns and the Struggle for Gamer Identity from Quello Center on Vimeo.

To what extent do our fake images allow some of us (I mean the gamers) to be nasty – and even criminal – in the gaming world? Professor Robby Rattan, after a wonderful rap show about quantitative and qualitative research, raised the idea that if gamers could have a fake image which is far from a human one (not just human bodies without arms, for example), something totally fictional, if I may add, maybe some disgusting human characteristics (such as sexism and racism) would be vanished. You must admit that it is a very attractive idea.

Oh, I almost forgot, there was wonderful light refreshment before the lecture, and there was a drinks reception after the lecture (which I did not attend because I had to hurry for my evening walk with my wife. Sorry). The whole event took place at the very busy Kellogg Conference Center (we could hear the voices and buzz of other events through the walls), contributing to a very promising beginning for the Quello Lectures to follow. 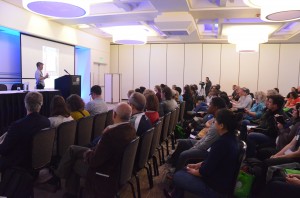 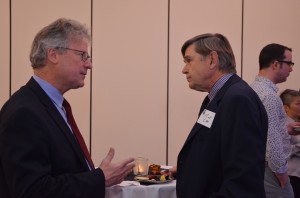 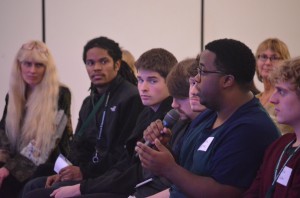