The Director Presents in Europe on our Quello Search Project

Bill Dutton had a productive and challenging week in Europe speaking about the Quello Center’s work on search and politics. The findings of our project, called ‘The Part Played by Search in Shaping Public Opinion’, suggested that concerns over fake news, echo chambers, and filter bubbles is ‘overhyped and underresearched’. The project was supported by Google, and the findings and methodology are publicly available online (see references), along with the slides I adapted for each of the particular talks. The slides are posted here: https://www.slideshare.net/WHDutton/search-and-politics-fake-news-echo-chambers-and-filter-bubbles-july2017

In Paris, on the 10th and 11th, Bill was able to speak at a UNESCO Knowledge Café for a seminar chaired by the Director for Freedom of Expression and Media Development, Guy Berger, for UNESCO staff, which included UNESCO’s Xianhong Hu. He then met with members of the French Audio Visual Regulator, the Conseil Supérieur de l’Audiovisuel (CSA); and then members of the Ministère de la Culture (Ministry of Culture); and gave a lecture at Sciences Po, which was jointly organized by Thierry Vedel for the MediaLab and CEVIPOF. Bill was also able to meet over lunch with a former colleague in the President’s office at the French National Commission on Informatics and Liberty (CNIL), which is central to data protection in France. 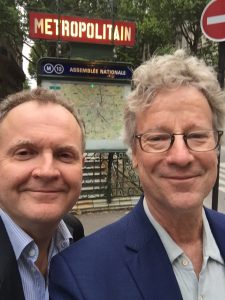 On the 12th, Bill was in Rome, where he first spoke at a roundtable over a wonderful lunch at the Centro Studi Americani – the Center for American Studies. That evening, he spoke on the Terrazza dei Cesari with members of YouTrend, an organization of political communicators in Italy, which was picked up by over a thousand on a Facebook Live video stream. The talk was sandwiched by an aperitif and dinner, and sequentially translated. 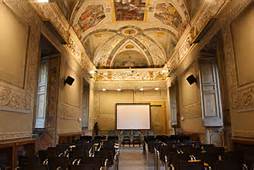 His last stop was in Berlin, where Bill was able to meet at the Ministry for Culture with representatives of the state media authorities, representing the German Lander governments. He finished his talks with a roundtable at the Alexander von Humboldt Institute für Internet und Gesellschaft (HIIG – Germany’s first Internet Institute), chaired by Professor Dr. Wolfgang Schulz and joined by Professor Dr. Dr. Ingolf Pernice. Bill is a member of HIIG’s Advisory Committee, and noted how great it was to end his trip with a sense of the quality and diversity of faculty, fellows and visitors at the Institute. 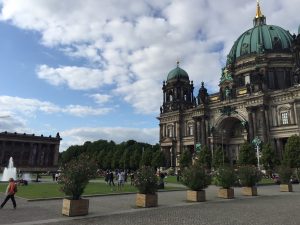 This week was an incredible outreach opportunity for the Quello Center to convey the results of our research. The Center wants to thank all of those who helped organize and attended these events; thank all the faculty on the project, including Grant Blank, Elizabeth Dubois, and Bibi Reisdorf, in addition to Bill, as well as our graduate assistants, Sabrina Ahmed and Craig Robertson; and thank our colleagues at Google for their confidence in the Quello Search Project.

Dutton, W. H. Talking Points that Formed the Basis for the Talks in Europe: https://www.slideshare.net/WHDutton/search-and-politics-fake-news-echo-chambers-and-filter-bubbles-july2017